Their nationwide index of apartment prices (see press release) rose 11.1% year on year as of September 2018. The prices for family homes appreciated 6.7%. The land price index is up 5.5% year on year. The quarterly price rises (June 2018 to September 2018), at 2.8%, 1.6% and 1.4% for apartments, family houses and land, showed no sign of slowdown ahead of the Czech National Bank’s 1 October change in mortgage market regulations. Were transactions “rushed through” by buyers ahead of that deadline? The Czech National Bank has suggested that there was an effect since. Q4 2018’s HB Index data will tell us more. 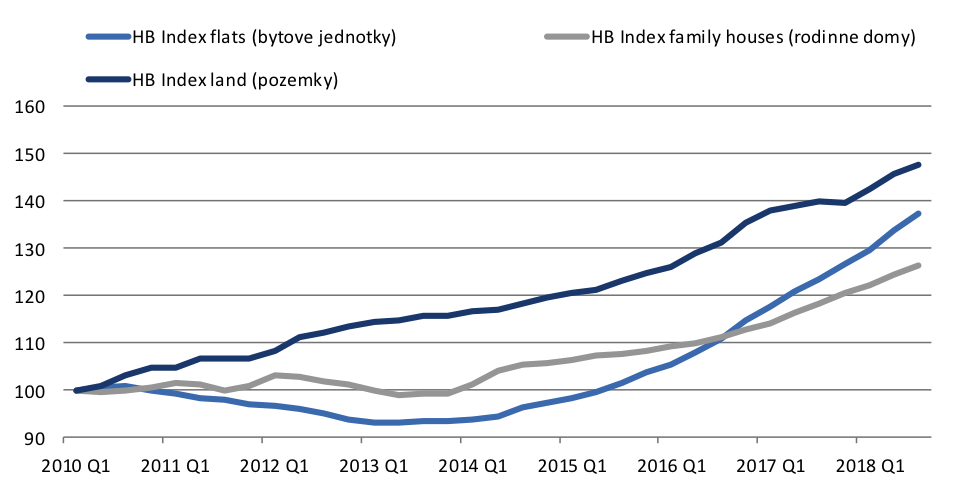 What about the longer term prognosis for Czech residential house prices? We see two factors as helping to sustain demand over the next two years. The first is that continued wage rises of 8% year-on-year estimated on a national average basis in 2018, 6%-8% estimated in 2019, boosts affordability of homes. Czech wages have thus, in the last 2 years at least, kept pace with house price appreciation. An example helps to understand how this works: a buyer with a monthly salary of CZK 100,000 in the year 2017, which rose (an average) 8% in 2018 to CZK 108,000 was able to borrow (for example) 5 times annual salary, or CZK 6mn in 2017 but CZK 6.48mn in 2018. This example generates nearly CZK 0.5mn of extra purchasing power.
The second positive factor is ample money in circulation in the Czech financial system, with investors, professional or amateur, looking for places to invest it. The period of the “currency ceiling” against the EUR saw large interventions by the Central Bank and creation of money in CZK. Much of this CZK remains extant and has found its way into asset markets, including bonds, equities and real estate.

The major Czech banks remain awash with liquidity, which counterbalances to some extent those CNB restrictions on high levels of mortgage borrowing, introduced in October 2018.
What are the major risks, presently? Aside from an economic slowdown hitting employment levels and therefore the wage escalator, the major risks include further tightening of policy rates from the CNB, acting to try to mop up the surplus liquidity. Last but not least is the fact that prices of homes certainly in parts of Prague, have gone beyond the means of most Czechs. Price per square metre* versus GDP per capita places the country, at the moment, amongst the 4 or 5 most expensive in the EU.
Which factors will prevail? Housing supply constraints as well as the mentioned wage growth and ample capital already in the Czech system should keep prices floating higher despite slower money supply expansion, higher interest rates, the CNB restrictions on mortgages and affordability issues acting to slow the rate of house price increases. This holds unless emerging signs of a financial crisis or global economic recession turn into reality, the likelihood of which is increasing looking into 2020. At such a point, real estate prices would be hit, along with other financial assets, regardless of any other factors.
* data compiled by Global Property Guide, January 2019