What is different about COVID-19 that makes it such a threat to the global economy and markets?

The difference this pathogen has compared to all the previous coronaviruses or other pandemics observed in recent decades is not its death rate or even its infection rate “R0 measurement” but its apparent ability for carriers to infect others without the carrier even knowing that they have it.

This implies an inevitable spreading to much of the world’s population, if left unchecked. This ability of COVID-19 explains the fearful, even panicky, behaviour of host populations. In this way, it is different from other pathogens, so much of the comparisons with the socioeconomic effects of pathogens in the past is bunk.

Countries appear to have two choices to containing the spread of COVID-19. One we can call the “Chinese solution” and the other, as announced first by Tokyo, the “Japanese solution”. China opted, perhaps in the case of Wuhan and elsewhere was forced to adopt, for a fast-spreading epidemic, mass-quarantining, a big spike in cases and a big drop-off (which they now hope for). The risk with this strategy is reinfection or fresh infection in new populations in the country. In Japan, it became public policy that those with mild symptoms should not go to hospital but sit it out at home in “self-isolation”. The choice they have made is to allow a more gentle containment strategy in an attempt to minimize socioeconomic disruption.

Countries with rising infection rates face this choice right now. The UK government has outlined in its containment strategy the desire to spread out infections through time. They hope that by doing so that the UK’s National Health Service will then cope with the number of serious cases and that the onset of warmer weather will slow COVID-19 down. If most of the world adopts the “Japanese” method, the economic disruption is likely be less shockingly severe (unlike in China, see chart below) but will be spread out into the future. The problem with the longer-term strategy is that the “all-clear” removal of the threat of asymptomatic transmission will be further away in time: all activity related to business or leisure travel and manufacturing supply chain activity will be restarted later rather than sooner and the negative economic effects will thus linger longer. In this sense the draconian Chinese approach (if it works) might be the better choice.

What about the economic effects? In the “Japanese model” leisure and business travel is not possible for a longer period of time. No travel means almost all GDP associated with the travel journey is lost. Taking the example of Italy, tourism is 14% of GDP. Modelled most simplistically, if there were no visits for 3 months, the hit to Italian GDP would be -3.5% for 3 months and double that for 6 months. What would shrinking Italian GDP by -3.5% or -7% for a year do to the fragile Italian financial system?

The first manifestation of this risk came out in China: on 29 February, the Chinese Purchasing Manager Index (PMI) readings for February were released. They were shocking, much worse than in the 2008-09 crisis period. They point to a deep recession right now. These numbers will become the bellwether (with the next release end March) of whether there is a “rebound phase” in China soon. But in the meantime, more and more commentators are tracking coincident activity as travel journeys, pollution levels and coal consumption (all of which suggest no rebound yet). So, we will have a clue about the next PMI release before it comes. Yes, a rebound may come, sooner or probably later, as supply chains and domestic tourism slowly repair. China’s GDP hit will be severe, which matters as it represents about 17% of the world economy. And we also worry what the next China inflation reading (due by mid-month) will tell us about prices and future social stability there. 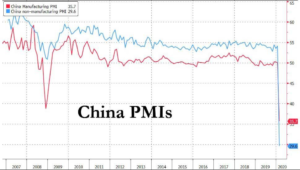